The Human Leukocyte Antigen (HLA) genes are the most polymorphic genes in the human genome and play a key role in the immune response(3). HLA genotyping is important to identify the best donor-recipient match for transplants. The high level of polymorphism presents a technical challenge to accurately identify alleles. HLA typing by Sanger-based sequencing, where both alleles are amplified and sequenced together, can result in phase ambiguities due to multiple polymorphisms shared between alleles(1). Next generation sequencing methods, using instruments such as the Illumina MiSeq and HiSeq, Ion Torrent PGM and Proton, allow a high level of resolution for HLA typing. The clonal amplification and ability to produce millions of sequence reads overcomes the potential for phase ambiguities and extends the regions that can be sequenced(2).

The analysis works by matching sample reads to a dictionary reference file with the allele-specific sequences for the HLA genes targeted. In assigning reads to an allele, mismatches that cause amino acid changes are given the highest weight, followed by synonymous mismatches in the CDS regions. A score is calculated for the likelihood that the allele is a correct allele in the genotype. The top allele pair matches are reported in the HLA Report. 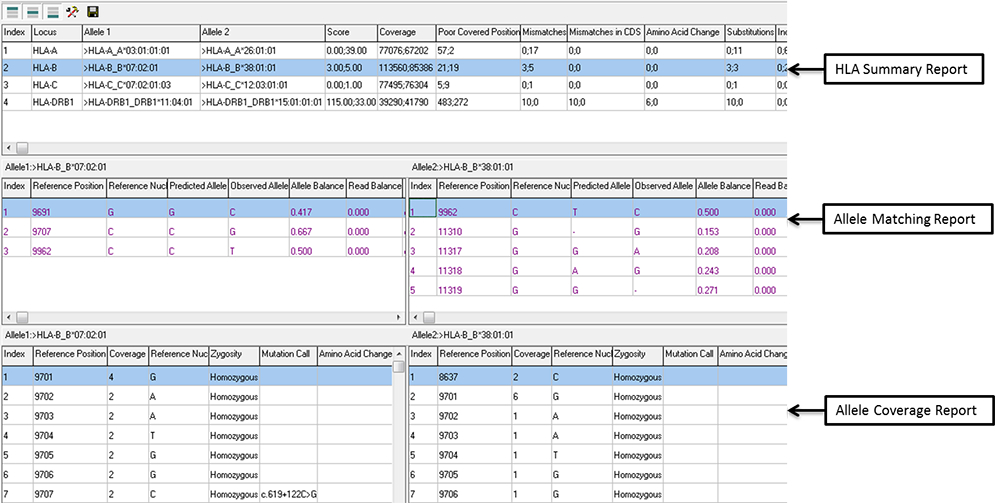 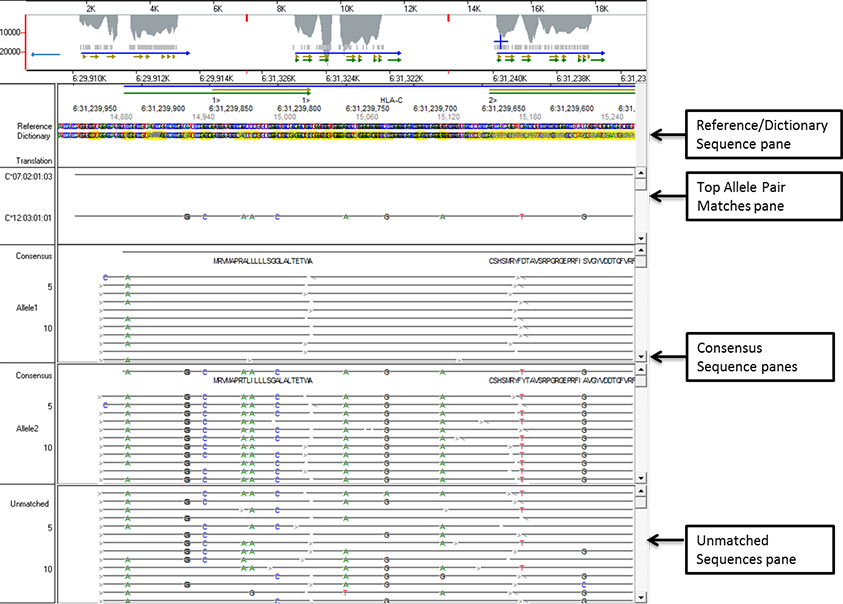 The NextGENe Viewer displays HLA-specific visualization. The top pane is the same as the default view, showing the coverage (in gray) across all genes included for the project. Second from the top is the Reference/Dictionary pane, which shows the reference sequence (from the Genbank file) on top and the dictionary sequence below. The dictionary sequence is displayed with yellow highlighting for the positions of polymorphisms (using IUPAC nomenclature). Conserved positions that are the same for all known alleles for the gene show no highlighting. Next is the Top Allele Pair Matches pane which shows the dictionary sequence for the alleles best matched to the sample data with the allele names shown on the left. The next two panes are the Consensus Sequence panes which show the consensus sequence for the sample data along with the aligned reads for the selected allele pair.