LOH occurs when a somatic cell contains only one copy of an allele due to non-disjunction during mitosis, segregation during recombination, or deletion of a chromosome segment. LOH becomes critical when the remaining allele contains a point mutation that renders the gene inactive. This is a common occurrence in cancers where a tumor suppressor gene is affected.

GeneMarker software fragment analysis software, has been developed to aid researchers and technicians in the detection of LOH within cancer cells, and is compatible with all major genetic analyzers including: Applied BioSystems GeneMapper® software or MRC Holland's Coffalyser.Net software. GeneMarker software is also compatible with outputs from all major sequencing systems, including ABI®PRISM, Applied Biosystems® SeqStudio, and Spectrum Compact CE genetic analyzers, as well as custom primers or commercially available 4-6 dye chemistries.

Figure 1: Example of LOH Traces and Ratio Plots: The blue trace is the experimental sample overlaid on the red reference sample trace for immediate visualization of LOH. 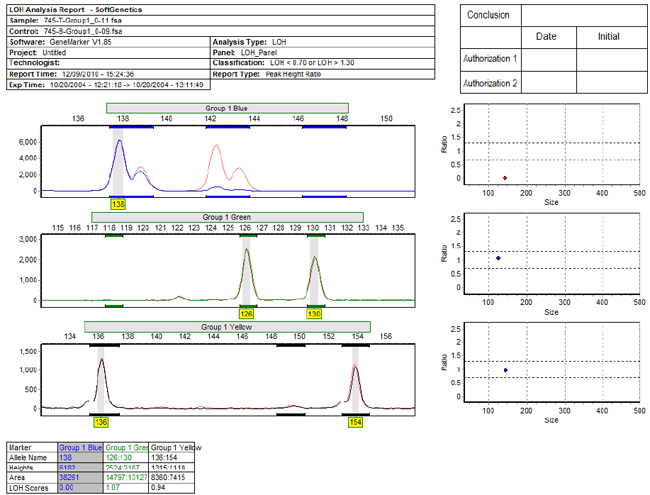